Tarrik Jumaan Brock (born December 25, 1973) is an American former professional baseball player and current coach. He is the first base coach for the Pittsburgh Pirates of Major League Baseball (MLB). An outfielder who batted and threw left-handed, he played part of one season in MLB for the Chicago Cubs. He has coached in MLB for the Houston Astros and San Diego Padres.

Brock was originally drafted by the Detroit Tigers in the 2nd round of the 1991 amateur draft. Of the eleven second-round draftees who made the major leagues, he was the last to make his debut. After six years in the Tigers' system, spent mostly at the A-ball level, Brock was selected by the Seattle Mariners in the Rule 5 draft. Brock spent two seasons in Seattles' minor league system before being released in January 1999.

On April 8 of that year, Brock was signed by the Colorado Rockies and assigned to their AA affiliate, Carolina. He was sent to the Cubs on July 7 as the player to be named later in a trade made on March 28, before he was even under contract with the Rockies. The Rockies in return obtained two prospects, John Cotton and Kevin Rawitzer, neither of whom made the major leagues.

Brock hit only .217 in 54 games with the Cubs' AA affiliate at West Tennessee that season, but nevertheless made the Cubs' major league roster in spring training of 2000. He made his major league debut on March 29, 2000, appearing as a left fielder in the Cubs' Opening Day game against the New York Mets in the Tokyo Dome in Japan. He faced Rich Rodriguez in his first major league at bat and singled to right field. Sammy Sosa was thrown out at home on the play, ending the inning.

Brock stayed with the team through April 22, but struggled, managing only one other hit, a single off Vladimir Núñez on April 16. He was sent back to Iowa and never made it back to the major leagues. Brock played in the independent Northern League in 2001 and was named an All-Star, but a comeback in 2002 and 2003 with the Los Angeles Dodgers organization failed to get him back to the game's highest level. For his major league career, Brock hit .167 (2-for-12), had 4 walks, 4 strikeouts, and stole one base. 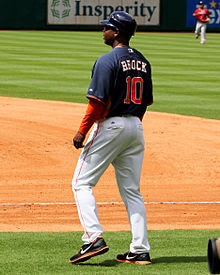 In 2006, he served as a coach with the Ogden Raptors. From 2007 through 2013, Brock worked as the Florida Marlins‘ outfield and baserunning coordinator. During 2010, he served as interim first base coach.[1]

In 2014, Brock was the first base coach for the Houston Astros. He joined the San Diego Padres organization as a minor league coordinator for the 2015 season, before becoming their first base coach before the 2016 season.[1]

In 2017, he joined the Los Angeles Dodgers organization as outfield/baserunning coordinator.

Brock was hired by the Pittsburgh Pirates as their first base coach prior to the 2020 season.[2]

Things Discussed:
Tarrik Brock, Pirates Major League 1b Coach, Former MLB Player, Dodgers Outfield/Baserunning Coach
Tarrik Brock is a super person who knows how to treat people, work with players of all levels, teach, listen, instruct and so much more. Listen to this show, it is outstanding. We cover lots of things but especially Coaching 1b and baserunning, the two work together. Coaching first base, so much to this, communication with players, with 3rd base coach, teaching each player individually, using stats, video, so much to coaching first base. Fail forward, listen to Tarrik talk about this, awesome. Signs for the runners in case they are not sure of the 3rd base coach sign. A lot of teaching has to do with how the player feels. Running through first, how 1b coach helps. How to read the ball after you hit it to help you run through or make the turn. Look at the defense to help you base run bases. Runner 1st and 2nd, 1b coach responsibilities. Runner on 2nd and 3rd, 1b coach responsibilities. Common mistakes in the secondary lead. Youth baseball, what is the main thing it lacks today? So much to this show, Tarrik Brock Twitter @Tarrikbrock